As a copywriter I don’t always have the privilege of being able to take part in the projects that I’m tasked to write about. Indeed it wasn’t until my colleagues and I arrived at the Foundation for Peace in Warrington that we found out, to our surprise and delight, that we were going to help the facilitators with the last group session of a three-day residential course that some young lads from the Everton Free School were attending.

Having done my research I was fully aware of the Foundation for Peace’s background, but the sheer size of the building came as something of a surprise. Designed to reflect the shape of a dove of peace since its opening in 2000 it has been at the vanguard of promoting peaceful means as the solution to conflict, and its latest project, THINK, looks set to capitalise on that.

The theme we were working with the lads on was extremism, and having been divided into groups of three or four, each group had to think about an extremist group, ISIS, KKK and EDL. I was on the ISIS group and despite them being slightly wary of me as I was ‘new’ to them, once we started discussing the ideology of ISIS and its mantra of mass-killings they started opening up. Much of what we were discussing was new to them and given that we had a limited time to explore such a mammoth topic, by the end they had recognised the inherent evil nature of ISIS. When asked if they thought of any good reason to join ISIS, they unanimously said ‘No’.

Each group then presented back their findings to everyone in the room, and it was remarkable to see how well they’d grasped that all three organisations only offered a negative message, and that they were a force for bad in the world.

To see THINK in action was a real eye-opener for me and I came away inspired by the work that Foundation 4 Peace is doing in getting young people to think about their views. To see those views being challenged and transformed was uplifting. 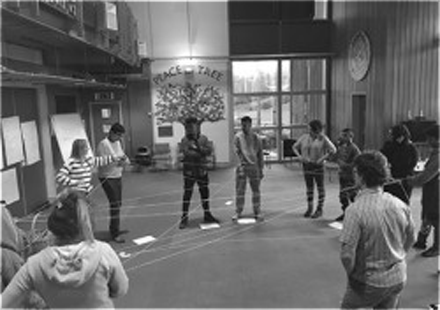 The Importance Of THINK