THINK awards round off a year of achievement.

The THINK project’s first year came to an end with a celebration, when we invited the young people who had participated in the project to come back to the Tim Parry Johnathan Ball Peace Centre to recognise their achievements with a celebration and learning event. We also awarded end of year certificates and special trophies for a number of great performances.

Whilst the THINK project differs from traditional schooling in its approach to experiential learning, by using techniques such as an intensive residential programme, it also adopts more traditional methods such as a certificate and trophy award. On hand to present the certificates were charity founder, Colin Parry OBE and retired Everton and Chelsea footballer Graham Stuart who also gave a motivational talk to the THINK group.

Whilst THINK is a serious project that prepares young people as leaders, and reduces their vulnerability to, and increases their resilience of, radicalisation – this was a relaxed day, where we celebrated their achievements with food and drink, which culminated in a presentation.

THINK is preparing for its second year commencing in Autumn 2015. 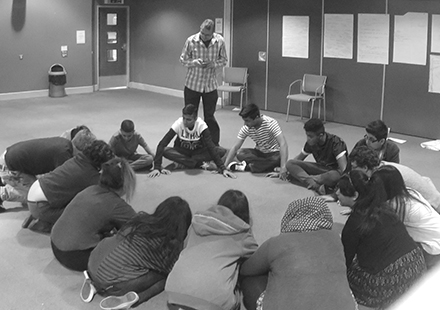